In this article written to mark our 70th anniversary in 2015, Colin Anderson reflects on our long history.

The Philharmonia has been at the top of its league as a concert-giving and recording orchestra since its inception. 27 October 1945 was the date of the Philharmonia’s first appearance, the culmination of Walter Legge’s vision to form an orchestral ensemble of the highest possible standard, and the beginning of a London and international presence of considerable distinction.

Sir Thomas Beecham conducted the Philharmonia’s opening concert but disagreements between him and Legge regarding power-sharing led Beecham to go his own way, and he formed the Royal Philharmonic Orchestra a few years later. For Legge it was an opportunity to secure Herbert von Karajan (1908-89). He, for numerous years, was de facto principal conductor, notching up many Philharmonia concerts, tours and recordings, before such engagements became fewer, then nothing at all, when he was called to the Berlin Philharmonic in 1955, which would become a lifetime’s relationship for the Austrian.

The London-born impresario Legge (1906-1979, who in 1953 married the singer Elisabeth Schwarzkopf) was a recording producer for EMI and Columbia and his connection with Beecham had been cemented pre-war at Covent Garden. In terms of chronology in London’s orchestral life, the Philharmonia followed the London Symphony Orchestra, BBC Symphony and London Philharmonic, and was formed when the Royal Festival Hall was still a twinkle in its planners’ eyes.

Given Legge’s proclivities, not surprisingly the Philharmonia was a regular visitor to studios, invariably the famed Abbey Road. First-class recordings were the result, warmly welcomed by reviewers on their first appearances, on 78s and then LPs of course. Today those precious documents, celebrating associations with such maestros as Furtwängler, Karajan, Klemperer, Sawallisch, Giulini and Kletzki, and latterly with Dohnányi, Maazel, Muti and Sinopoli, remain just as significant, whether through CDs or streaming (sometimes on re-mastered LPs, the vinyl market still thriving for enthusiasts).

But if recording techniques and the means to pin your ears back have developed and diversified, then the concert-hall has stayed put. Time and again, concerts attract full houses for something that remains reassuringly traditional – the simple if potentially spiritual act of sitting and listening in the same space as the musicians, the communal involvement with music.

Orchestras need conductors. One such is Christoph von Dohnányi, long-associated with the Philharmonia as Principal Guest, then as Principal Conductor, and now as Honorary Conductor for Life. He praises the Philharmonia’s “precision and flexibility” and that “from the off the great conductors, such as Karajan and Klemperer, later Muti and Maazel, were attracted to the Philharmonia. I like the balance of technical accomplishment and emotional commitment, and also the orchestra’s terrific sense of sound. It’s a nice orchestra, very friendly, and it has become very special to me.”

Vladimir Ashkenazy, always welcome and popular for his Philharmonia projects says: “I would like to stress that the Philharmonia Orchestra has unusual warmth and commitment to music-making: every phrase, every possible message from the conductor is the most important element in the musicians’ activity. It’s so inspiring.”

A fine example of a player with these qualities is principal clarinettist Mark van de Wiel. ‘It’s such a privilege to be a member of this marvellous orchestra. I often went to Philharmonia concerts as a student, sitting in the Royal Festival Hall choir seats to watch the woodwind players and the conductor. It’s a great pleasure that some of the players who inspired me then became my colleagues and friends. And when Nigel Black, Robin O’Neill and myself sit in our horn, bassoon and clarinet chairs respectively in the Festival Hall, it’s often on our minds that we occupied exactly the same seats as friends in the National Youth Orchestra.

“The Philharmonia is constantly renewing itself, and while new members will be chosen because they can offer the warmth, flexibility and refinement that the Philharmonia demands, their own personal qualities and style will in turn influence us. We are therefore gradually changing, but everyone who joins is, perhaps even without realising it, drawn towards the Philharmonia’s own style. It’s a fascinating process, and a great responsibility for us to keep up the standard and sound. We’re helped in this by a number of marvellous conductors. Concerts with Esa-Pekka and Christoph von Dohnányi are always highlights, and we very much miss Lorin Maazel, Sir Charles Mackerras and Kurt Sanderling. It’s daunting and challenging, and I love every minute.”

The aforementioned Robin O’Neill, bassoonist, says: “All through my childhood and early days as a musician the Philharmonia stood out amongst the other orchestras. The sound was instantly recognisable. When instruments make these sounds we create harmony and music. This is not dry theorising. It is the key to the sound of the Philharmonia or, indeed, any great orchestra. It is said that a melody can only be played as well as its accompaniment allows and I still get a thrill to see how much care and attention the engine-room of the strings lavish on this. As a bassoonist, I play most of my time in the same realm as the cellos and I’ve come to the conclusion that there is simply no finer section on the planet. They sing every note with such intensity. A few years ago in the first movement of Bruckner 7 at the Proms they reduced me to a quietly blubbing heap, and I thank them for that.

“Every player in the orchestra has to have a highly developed sense of intonation and the flexibility to move one way or the other to suit the needs of a particular chord or chord sequence. In the woodwind section our ability to blend is crucial, so too to bring the essential soloistic quality. In the early days the Philharmonia’s quartet of woodwind principals was known as ‘Legge’s Royal Flush’ but there was certainly no gamble involved! Karajan fancied a couple of them for the Berlin Philharmonic. The tradition of a homogenous, beautifully balanced wind-choir persists to this day.

“Wilhelm Furtwängler, with whom the Philharmonia made one of the great recordings of Wagner’s Tristan and Isolde, had an obsession with legato or melos, the unending melody. He was probably the most important person in creating the Philharmonia’s distinctive sound, then nurtured by Karajan, Klemperer, Sanderling, Svetlanov and more recently Dohnányi and Temirkanov. When an orchestra concentrates all its energies on this concept the sound glows in even the quietest of pianissimos. Add to that an animal energy at the other end of the spectrum and the result is a fortissimo with massive depth and sonority. I swear to you there is no more exciting place to be than where I sit, right in the middle of it all, and every day of work with this superb and charming bunch of people is a pleasure. Mark, Nigel Black and myself played for Karajan in the European Community Youth Orchestra in the early 1980s, thus bringing the Philharmonia connection full-circle.”

In terms of early recognition for the Philharmonia, [former Managing Director] David Whelton states that the Philharmonia was from the outset an international orchestra, both through its overseas touring and its recording presence. It is now also a national one as well. In addition to the residency at London’s Royal Festival Hall, there are highly successful residencies in Bedford, Leicester, Canterbury, Basingstoke, and at the Three Choirs Festival. In the course of the year, the Orchestra performs right across the UK. “I am very proud of the indispensable role that the Philharmonia plays in British musical life,” says Whelton.

But it all might not have been, for the Philharmonia had to survive a potentially terminal hiatus. In March 1964 Legge announced the orchestra’s disbanding. The players rallied, took matters into their own hands, elected a governing body, added ‘New’ to the title and carried on the good work, first up with Klemperer conducting Beethoven’s Choral Symphony. If you’ve ever wondered why his recording of Mahler’s Das Lied von der Erde is credited with two orchestras, it’s because the sessions took place either side of Legge’s move and the players’ fight back. The ‘New’ was dropped some years later, the orchestra’s third era celebrated with a Beethoven concert under Riccardo Muti and attracting pianist Sviatoslav Richter.

The Philharmonia’s achievements are copiously documented through recordings  and include welcoming an elderly Richard Strauss to conduct, and the orchestra then giving the posthumous premiere of his Four Last Songs (1950, with Kirsten Flagstad, Furtwängler conducting); and, even earlier, in 1946, being in the studio for Leonard Bernstein playing and directing Ravel’s G major Piano Concerto, West Side Story a decade away. 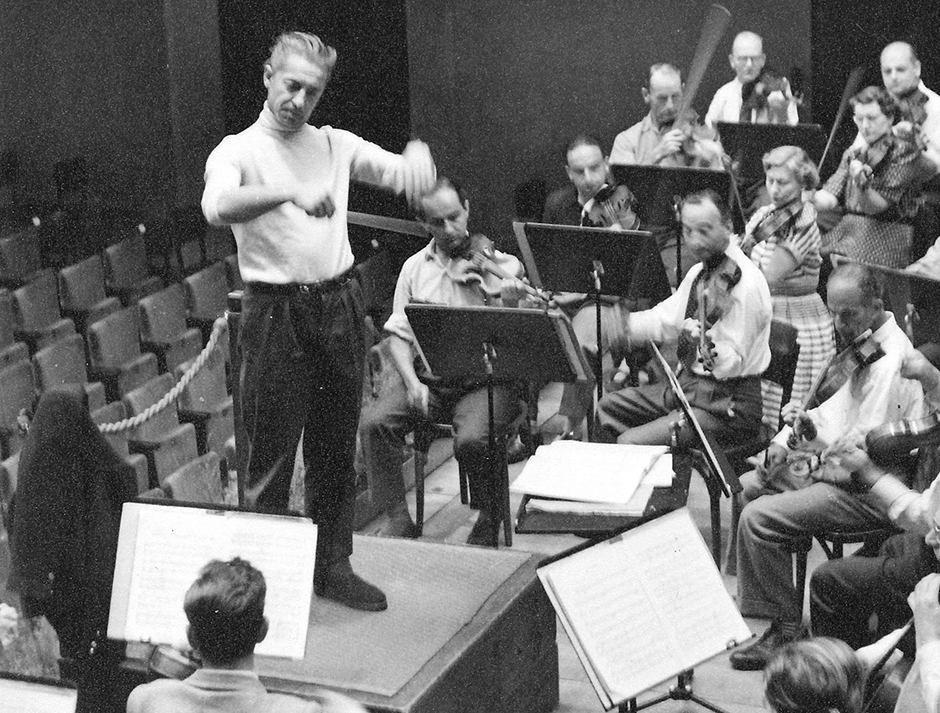