The word cello is actually just an abbreviation of violoncello, an Italian word meaning “little violone”.

The Principal Cello Chair is endowed in memory of Amaryllis (1925-1999) by the Amaryllis Fleming Foundation and Fleming Family and Partners Ltd.

The No. 2 Cello Chair is endowed by Jane and Julian Langer.

A violone was an instrument common in the 17th and 18th centuries which evolved into today’s double bass. The cello is the tenor voice in the string section. It can play an octave lower than the viola and, as with the other Strings, the cello section sits two to a desk. There are usually between eight and twelve cellos in a symphony orchestra.

Perhaps more than any other instrument the cello sound can create a melancholy mood. Its deep tenor voice can be further enhanced by a broad vibrato which on other instruments might sound ridiculous. With its particularly wide range and powerful sound it can one minute be playing a bass line and the next a melody that is high enough for the rest of the orchestra to move underneath. Another of its useful qualities is its clarity of attack, which enables it to play crisp architectural shapes as well as driving rhythmic patterns and makes the cello a key component of the orchestra’s ‘engine room’.

The Cello has four strings, tuned in 5ths to C, G, D and A. The lower strings have a richer, darker sound and to exploit this it is quite common for composers to write that a particular phrase should be played on a particular string. Writing Sul C (on the C) or Sul G above the music asks the player to continue playing on the low C or G string when they would otherwise have moved up onto one of the higher strings.

Most cello music will be written in the bass clef and occasionally moves into tenor clef as the music gets higher. When the music is very high the treble clef is used. Players do not like to change clefs too often and so will only want to go into a higher clef if the music is going to stay up high for a while. Changing back again presents similar problems and cello players will often mention that they do not like to read low notes in tenor clef. 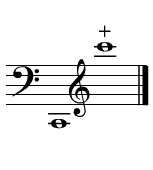 Notes that are indicated to be played separately can be played on the string or can allow the bow to bounce off the string. With a large body of string players, all playing repeated quavers together, for instance in the accompaniment of a piece by Haydn, Mozart or Beethoven, the effect of on the string versus off the string can be very different.

The style of letting the bow jump off the string was made popular by Mendelssohn in his “Midsummer Night’s Dream”. It allowed him to explore the character of the scherzo’s dancing fairies, which was difficult to express with the normal ‘on the string style’ of playing. Mendelssohn was one of the first people to make the ‘off the string’ style of playing popular in serious western classical music. What flowed from that was more use of the bouncy stroke among players, particularly for accompaniment passages.

Traditionally cellos are made of spruce and maple, but recently they’ve been brought bang-up-to-date with a carbon fiber version.

More about the cello