The tuba has a beautiful warmth and richness in its sound.

In this film, Andrew Cresci introduces his instrument - the tuba

The most basic writing for the instrument treats it as a loud ‘oom-pah band’ instrument used just to pick out the bass line of the music. This falls a long way short of what the tuba does best. In great orchestral writing it plays expressive bass melodies that, due to its depth of tone, loom through the lower half of the orchestral texture. It is also perfect for creating tremendous swells which can be used to heighten the emotional peaks of the music in much the same way as the timpani are often used. And of course, when playing loudly alongside the whole brass section its effect of its immense power can be awesome.

There are several different tubas (or saxhorns), including the tenor tuba or euphonium, the bass tuba, and the BBb or contrabass tuba. Most modern instruments have a conical bore, but there are variations in construction and name from country to country. In the USA a ‘baritone’ refers to a euphonium, whereas in the UK it means a tenor horn. The ‘Wagner tuba’ is called ‘Tenor-Tuba’ in Germany, and so on. The three most common instruments in orchestras are the bass, the contrabass, and the euphonium. The tubas are of course the bass instrument of the brass section, but they are more than capable of playing melodies in the tenor register. 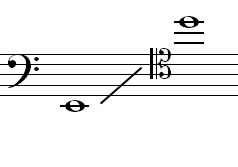 All tubas are ‘saxhorns’ and they are conical in shape, so they start very narrow and then get wider. They are all of similar construction. The three tubas are of different sizes: high Bb tenor tuba; BBb bass tuba and BBb contrabass tuba. In common with other brass instruments the sound is produced by buzzing the lips into the mouthpiece. The tuba can sound comical, funereal or many other things, just like any other instrument. People often think of Tubby the Tuba and oom-pah bands as being characteristic of the tuba and indeed it can play in a jocular way but it can also sound very sorrowful, and this is particularly effective in its middle register.

The lowest-ever tuba in the world was pitched at F three octaves below middle C, commissioned for the World Exhibition in New York in 1913. It needed two players – one to do the blowing and one to fiddle with the valves.

In this film, Philharmonia Orchestra Principal Trombone, Byron Fulcher, introduces the euphonium, an instrument that is an occasional visitor to the orchestra.