COVID-19 update: all live concerts to the beginning of August 2020 are sadly cancelled; help secure the future of the orchestra through our Keep the Philharmonia Playing appeal.

The violin could be said to define the orchestra, but it may be a little provocative to suggest that everything else is there merely as an accompaniment.

In this film, Zsolt-Tihamér Visontay introduces his instrument - the violin.

The Philharmonia’s Concert Master’s Chair is currently available for Endowment.

The Philharmonia’s Associate Leader’s Chair is currently available for Endowment.

The Philharmonia’s Assistant Leader’s Chair is currently available for Endowment.

The Philharmonia’s Pricipal Second Violin’s Chair is endowed by Clare Lager in memory of David Henfrey.

The other strings just fill out the lower harmonies, woodwinds provide pleasantly contrasting timbres, the brass is for added power when you need it and the percussion creates crisper edges and the occasional crash, but there would be no orchestra without the violin at its heart. Or would there?

Perhaps it was true once, but certainly since the beginning of the 20th century composers have begun to treat the sections of the orchestra as equal partners and distribute the music accordingly. It is also a fact that in the modern professional orchestra all the players are virtuosos and so less reliance need be placed on the traditionally more agile violins.

And what of the sound? The rich low notes can be very vocal and can be easily used to ‘tug the heart strings’. They can play very fast and also very high, but it is the endless sustain that characterises all string instruments that enables the violins, in particular, when they all play together, to create a floating effect which is responsible for some of the most sublime moments in music. Indeed it is primarily because people love the effect of massed string sounds that orchestras are so large (the violin is the most numerous of all the strings, with as many as 30 being used for a large orchestral work).

The violin is the highest pitched and most agile member of the string family. In a typical orchestra, violins are grouped into Firsts and Seconds. The leader of the First Violins is also the Leader of the Orchestra. Numbers vary, but usually there are sixteen Firsts and fourteen Seconds, seated two to a ‘desk’. 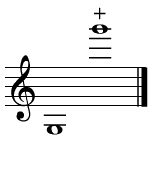 The violin is basically a small wooden box with strings stretched across the surface, but the finest examples can cost in the region of a million pounds. Every detail of the instrument contributes to its sound and for hundreds of years makers have guarded their secrets from competitors.

The bow is an equally important part of the instrument: its weight and balance greatly affects the violin’s sound and playability. The bow consists of a wooden stick with horse hair stretched between the two ends. The part of the bow that the player holds is called the frog and the other end, or very tip, of the bow is known as the point.

The violin is the highest pitched instrument in the string section. It has a resonant lower register and can also reach extremely high notes. As with many orchestral instruments there is no definite top note – it all depends on the skill of the player.

There are four strings, usually tuned to G3, D4, A4, E5. Each of the strings has different characteristics which composers exploit when writing music. For example a melody played high up on the G string will have a darker, thicker sound than the same melody at exactly the same pitch played low down on the A string.

The up bow (traveling from point to frog) has a weaker sound than the down bow, and therefore is often used on upbeats. The somewhat heavier down bow (moving from frog to point) is then used to emphasise the down beat in the music. Experienced players can play up and down bows so evenly that it is often impossible to tell which is which just by listening. However, when a particularly heavy attack is required there is no substitute for a strong downbow.

A Stradivarius violin holds the world record for the most expensive musical instrument sold at auction, raising 16 million dollars in London in June 2011 to raise money for the tsunami disaster relief fund.