Many live concerts up to June 2021 are sadly cancelled. We will be in touch shortly to let you know about your refund options. If you can, give what you can to keep the Philharmonia playing for you.

The saxophone is best known for its use in jazz and popular music.

In this film, Simon Haram introduces his instrument – the saxophone

The instrument has many characters such as the smooth sounds that defined the Big Band dance music of the 1940s and a raunchy edge that helped turn the 70s track Baker Street into a global hit. It is also widely used in orchestral music, but even today less so than the other members of the woodwind section.

The reluctance of many composers to adopt the instrument wholeheartedly is something of a mystery given that the saxophone was invented as long ago as 1840: four years before Mendelssohn wrote his Violin Concerto and 25 years before the first production of Wagner’s Tristan and Isolde. When it is actually used in the orchestra, in pieces such as Ravel’s Bolero or Prokofiev’s Romeo and Juliet, the effect can be wonderful. It has the power to carry a solo line over large orchestral textures and like other reed instruments the sound when soft can be quite melancholy. Another benefit of its use is that in passages when all the woodwind section is playing chords together it adds a slightly harder and clearer outer shell to the sound. 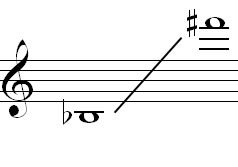 Saxophones come in many shapes and sizes from tiny high pitched sopranino saxes to massive contrabass instruments which can be almost two metres tall. The saxophone is a wind instrument with a reed and the body is made of brass, and so it forms a bridge between the woodwind and brass sections of the orchestra. It has a single reed and a conical bore.

At one time, there were two distinct schools of saxophone playing: the classical, and the jazz or popular. These distinctions have largely broken down today and most good sax players will be capable of playing in a variety of styles.

There are at least six different types of saxophones in use today, the most popular being the alto sax.